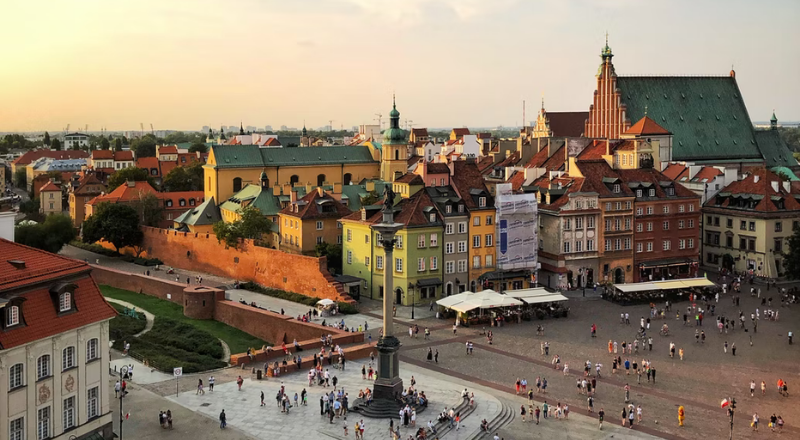 Last month, SONNET went on a virtual tour to Warsaw (Poland) to learn more about the role social innovation can play in transforming energy systems in Central and Eastern Europe. On 27–28 January, SONNET partners ICLEI Europe, Kozminski University and the City of Warsaw invited social innovation in energy (SIE) leaders and thinkers to discuss the current situation, needs and characteristics of SIEs in the region.

Open, online workshop on SIE in Central and Eastern Europe

The first day of the event was held as a webinar-style online workshop, open to anyone interested in the chance to e-meet experts and practitioners from the region and beyond to discuss opportunities that SIE creates for energy transition.

We kicked off with an “Energy Talk”, during which our experts Sabine Hielscher (Sussex University), Mariya Trifnova (Sofia University), Arthur Hinsch (ICLEI Europe) and Agata Stasik (Kozminski University) discussed the main challenges to energy transition in Central and Eastern Europe, and how SIEs can help address them.

We learned more about the major challenges to energy transition in the region, like coal dependency (in many cases), top-down governance systems, high energy poverty rates, and relatively poorer environmental awareness. While these factors significantly hinder the development of SIEs in Central and Eastern European countries, they – at the same time – create space for innovation, new solutions, and new partnerships.

There are also a number of factors working in favour of an innovative energy transition. The region is experience a cultural shift with respect to how people think about producing and consuming energy, new legal frameworks supporting the implementation of certain SIEs (like energy cooperatives), better coordination and collaboration among energy actors, and new ways of funding – with all this advancement, the region can become a fertile ground for SIEs.

“It’s not just regulation. Because regulation probably will change because it has to change, but it’s also these sort of shifts from existing norms and cultures of how energy is done and how the energy system needs to look.”

The expert panel was followed by a Keynote speech by Jacek Kisiel, Deputy Director, Office of Air Protection & Climate Policy at the City of Warsaw, who presented insights on how cities can support SIEs, drawing on Warsaw’s lessons learnt. Participants learnt about different activities launched by the city that support energy transition and reaching climate goals. This included: the Warsaw Climate Panel, a citizen panel that provides recommendations on how to make the city more sustainable; the Green Energy Center, a municipal energy advisory system for individual and institutional investors; and the anti-smog programme that supports Warsaw citizens in upgrading and/or replacing heating sources with more environmentally friendly ones.

“Cities are responsible for the majority of [greenhouse gas] emissions. It is very important that cities are aware of this, that the City Council and that the Mayor are aware of this, and prioritise this matter. Because this is the basis on which we can build other actions.”

The webinar ended with a deep-dive into two SIE initiatives in Central and Eastern Europe: oPEN Lab in Tartu (Estonia), and ZKlaster in Zgorzelec (Poland). Our speakers Merit Tatar (Institute of Baltic Studies) and Agnieszka Spirydowicz (ZKlaster) presented the cases – one which focuses on local transition to so-called “Positive Energy Neighbourhoods”, and the other one on Energy Clusters – and shed light on the SIE landscapes in Estonia and Poland.

Local workshop on how SIEs can be supported by Polish municipalities

The second day of the event was dedicated to a workshop in held in Polish, and specifically for Polish municipalities and local energy actors. The meeting was attended by representatives of nine cities, as well as research institutes, NGOs, and businesses from across Poland.

SONNET introduced participants to the concept and different types of SIEs, explaining why now is a good moment to start experimenting with new solutions for energy transition. We then dug deeper into the main energy challenges in the participating cities.

Participants indicated lack of awareness and education about climate change, lack of a clear vision and strategy for energy at the national level, weak inter-municipal collaboration on energy, and serious difficulties with decarbonising heating as the most dominant challenges. Overall, the consensus was that concrete political decisions and actions are essential to transform the outdated energy system in Poland.

The workshop then looked into how cities can experiment with new solutions for energy through, for example, City Labs. This took a practical approach, examining two successful examples – namely, Urban Lab in Gdynia and the SONNET City Lab in Warsaw.

Participants then “put pen to paper”, designing their own ideas for City Labs that could accelerate energy transitions in their municipalities. We harvested many interesting ideas, from a municipal energy advisory unit to advise citizens on better energy choices, to competitions for citizens to learn more about their energy consumption, a new municipal energy consumption monitoring system, and even a city-wide mapping of the least energy efficient buildings.

The SONNET on Tour in Warsaw event proved that there is a lot still to be done to transform energy systems in Central and Eastern European countries into more sustainable ones – and that SIEs can play an important role in that transformation. However, to achieve this, we need to advocate for more ambitious climate goals, bold political decisions, and SIE-friendly regulations, as well as seek alternative ways to finance energy transition.

How to finance energy transition

Since March 2020, SONNET’s “Explored: Social Innovation in Energy Transitions” has been digging into the…

Opportunity: Join us to explore unlocking the transformative power of social innovations in energy

Are you working on social innovation in energy? Then join SONNET on Wednesday, 9 June…